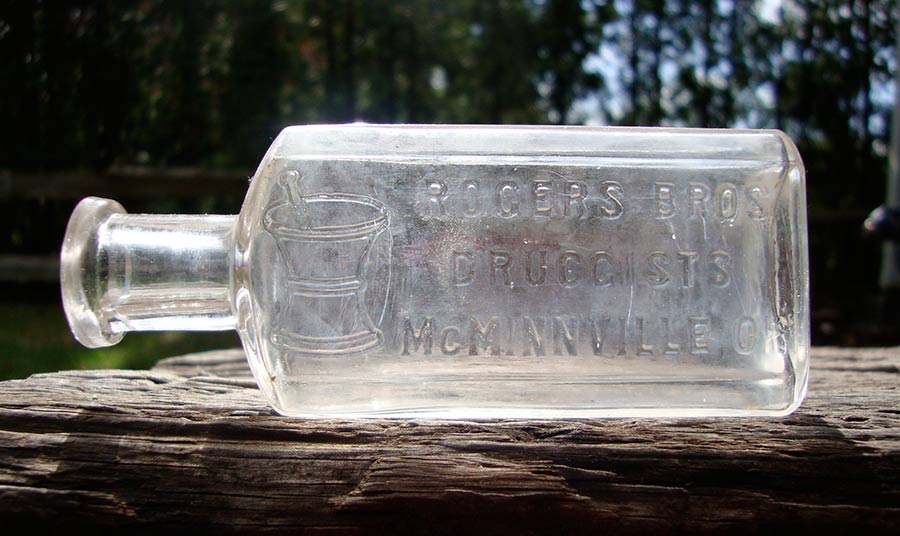 The most successful and enduring of all early McMinnville Oregon pharmacies was the business firm of brothers John and Frank Rogers. John Lewis Rogers, born in 1859 to Yamhill County pioneer J.W.Rogers, secured an education at McMinnville College (later to be renamed Linfield College) and entered into the drug business with P.W.Todd in 1883 at the young age of 24. Rogers and Todd stayed in business together for three years, at which point Todd retired and John’s brother Frank Rogers became a new partner in the firm. From 1886 into the first quarter of the twentieth century, Rogers Bros. Druggists successfully provided both home-made remedies and name-brand medicines. A third brother, Thomas H. Rogers, became a partner in the firm in 1902.

All of the Rogers brothers were very active in the community and were involved in numerous other organizations. John Rogers was director and Vice-president of the McMinnville National Bank prior to 1902, and was also a member of the Masonic, Odd Fellows, Workman and Woodmen orders. For many years he was an active member of the First Baptist Church. John Rogers passed away after a four year illness in 1902, much to the sorrow of the community and his two business partners. As mentioned in his obituary, “His counsel and assistance was sought by brethren and it was valued for its true worth. He was a bright business man and a thoroughly upright and conscientious citizen.” 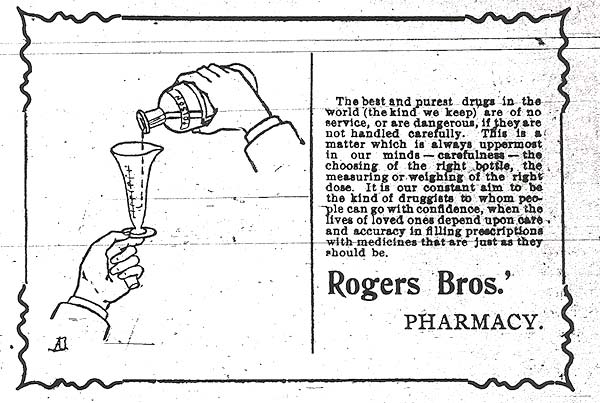 From an 1896 ad in the Yamhill Country Reporter

The Rogers Brothers business was located next to the First National Bank on the south side of Third and Davis. They advertised very heavily in the local newspaper, The Yamhill County Reporter. These advertisements prove particularly insightful in providing information about the wide range of products offered by their firm.

Some of the advertised items were of popular national brands, such as D.D.D. and Chamberlain’s Pain Balm. These products are now considered “patent medicines,” which contained more intoxicating substances such as morphine and laudanum as opposed to actual curative properties. In addition to name brands, Rogers Bros. created many of their own concoctions and sold them in glass bottles embossed with “Rogers. Bros. Druggists, McMinnville, Or.” Evidence suggests that this particular drugstore was the most popular of local firms during the period 1889 to the early 1900’s, as demonstrated by the vast number of Rogers bottles that have been uncovered in excavations around the city.

Besides selling medicines, Rogers Bros. offered a variety of other personal goods, such as razors and chamois vests. One advertisement from 1906 claims, “Shave yourself. It’s easy when you have the right kind of equipment and you cannot make a mistake if you let us help you select it. We have everything needed and just the quality that pleases critical shavers; keen razors, good strops, badger hair lather brushes, all the good shaving soaps, lotions, etc. all at the right prices. Rogers Bros. The Drug Center of Yamhill County.” 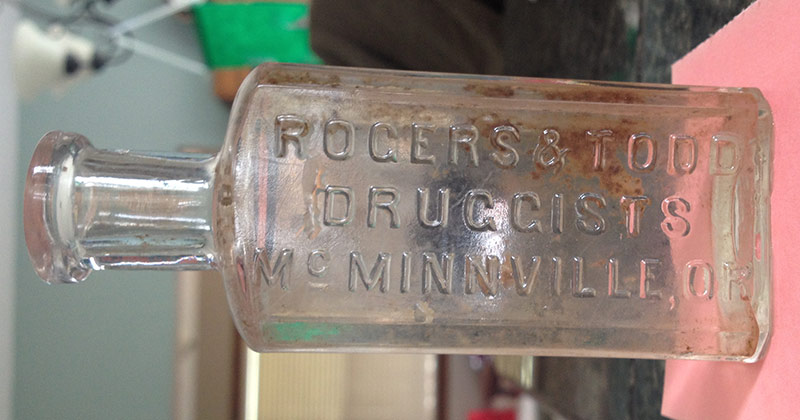