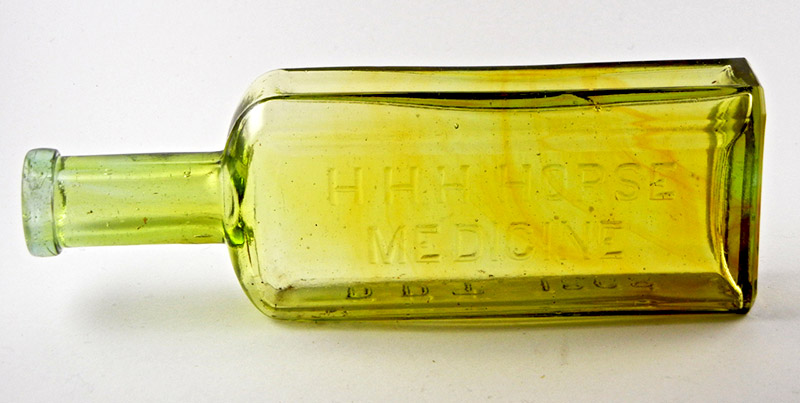 H.H.H. Horse Medicine was patented in 1867 by Daniel Dodge Tomlinson as Horseman’s Hope Horse Medicine. Tomlinson was located in the San Jose / Stockton, California area and was in the patent medicine industry (other advertised medicines include Celebrated Indian Pain Extractor). Manufacturing and distribution of HHH began the following year in 1868, and Tomlinson had his initials and first year of production embossed on the sides of the bottles from that time forward (D.D.T – 1868). The medicine was made of 52% alcohol, camphor oil, wintergreen, cedarwood, camphor soap and ammonia.

By the 1870s sales of the bottle were picking up and distribution extended throughout the West Coast. An 1877 ad placed in the Vancouver, Washington newspaper Vancouver Independent claims the medicine “is gaining a wide spread notoriety. Testimonials from all parts of the coast show it to be a companion in every family. It quickly removes Wind Galls, Spavins, Calions, Lumps, Sweeny, and all blemishes of the horse, while the family finds it indespensible for Sprains, Bruises, Aches, Pains, and wherever a good liniment is required.” As the ad suggests, the medicine was not strictly for horses and was often advertised as an external liniment for man. 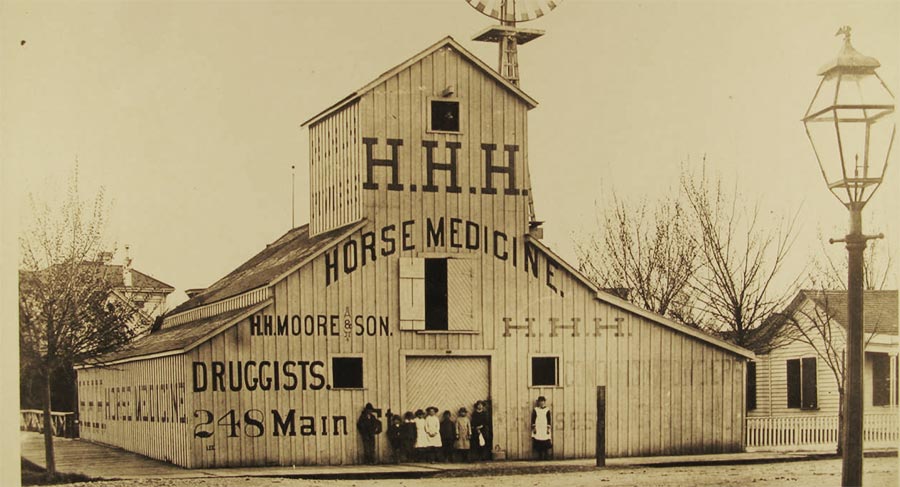 At some point early in the production of HHH the rights to the medicine were sold to proprietors Williams & Moore of Stockton, California. By 1880 Williams dropped out of the picture altogether, with H. H. Moore & Sons of Stockton taking ownership of the brand. Advertisements through the early 1900s show H.H. Moore & Sons as the sole proprietors of H.H.H. Shown above is an excellent image of Stockton, California barn featuring the advertising for the brand. It is unclear if this is also the facility where it was manufactured. (Source)

The success of the medicine is evidenced by the fact that they are commonly found in the western United States. An article in the 1889 Pacific Rural Press notes the company was so successful that outside parties were manufacturing and selling an imitation product under the same name (this was common practice in those days). H.H. Moore & Sons won a lawsuit in 1889 against the imitators and were awarded damages.

The shown ad is from an 1895 Honolulu, Hawaii Territory newspaper

Due to the success of the medicine there are many different variations of HHH Horse Medicine spread out over the course of its 40+ years of production. Early versions are aqua and quite crude. Most examples average $5 on eBay. Those that command higher prices are the particularly crude example and those in unusual colors.

The example shown on this page is one of my favorite dug bottles. It came from an old western town dump in the Pacific Northwest and probably dates to the early 1890s. The colors in it are truly outstanding. It is a beautiful citron yellow with green apple green undertones and amber swirls throughout the body. Additionally, the lip is actually aqua, suggesting it was pulled from a different batch of glass during production. Crazy colors like this are much harder to find than the aqua examples. 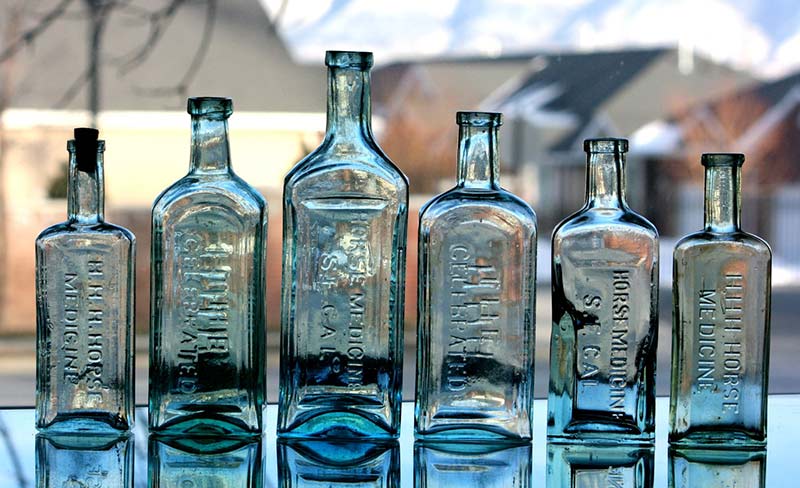 Shown above are six early versions of HHH Horse Medicine in Aqua. Note that embossing varies quite a bit between bottles. These were posted on the excellent Utah Antique Bottle Cliche Blog.